If you ride often enough, you’ll hear that at some point. What’s the best response?

First off, if you’re riding safely, continue what you’re doing, smile, and congratulate yourself on the fact that you’re doing something right—you put yourself in a position on the roadway where you could be seen.

Is the driver exhibiting aggression or is there a possibility you will be hit? Then do what he (I’ve personally never had this shouted at me by a female motorist) says and get off the road—for your safety and not to acquiesce to him. Then get out a pen and paper, make note of the vehicle and driver’s identifying features, and prepare to report it to the police.

Do not shout back. Do not gesture at the driver in any way. Breathe, think, and ride away in one piece. If this person is (as you’re likely thinking) an absolute idiot, don’t you want them further way from you? If they’re continuing to drive, they’re answering your wish—let them continue on their way.

And please — contemplate your contribution to the situation. Were you riding according to accepted traffic principles, and riding visibly & predictably? In your lifetime you will have many interactions with other road users. In all your encounters with others, there is only one common denominator—you. Make sure you know what you’re contributing to the equation.

The desire to teach a motorist a lesson on the road is understandable and reasonable. However, actually trying to do it is neither.

How do I expect the motorist to respond?

How do I respond when someone in public questions my actions in a curt manner? Chances are, unless you are a very self-composed, confident and thoughtful person at all times, the response will be one of defensiveness. Quite often, people’s first reactions are to defend their position and find fault with the other, in order to bolster their case. Perhaps, if enough time elapses and there is an opportunity for thoughtful, open discussion, points will be acknowledged by both parties in support of the other.

It’s worth asking yourself whether you think this is likely to happen while on the roadway with someone who is a) likely separated from you by some distance and b) within a vehicle.

As well, we need to always consider what can happen if our tactics go awry. There is a strong possibility that the other person will take offense to the confrontation (whether he or she initially instigated it or not), and lash out. This can-and does-happen.

Ask Lance Armstrong for his advice on this one. Some time ago, he and a riding partner were brushed by a motorist. He gave the guy the finger and threw a rock. The motorist turned the truck around and ran them off the road.

Here is an anecdote from one cycling instructor indicating the benefits of stepping back and considering the alternatives:

“I am a cyclist who has very strong feelings regarding our right to be on the road. I have to work to follow my own advice to not try to teach someone a lesson, but am very thankful for having followed that advice, in many situations.”

“In one such instance, a taxi passenger got out from the car in the center lane and walked directly across my path. I was close to expressing my opinion of his survival skills but did not. After I saw the tattoos on his knuckles and the t-shirt that said (I kid you not) ‘Be silent or be silenced’, I was very pleased with my decision.”

Trying to pass along to a motorist the reasons that we have a full right to be on the road is a tall order. Even in an ideal situation, if we had a chance to sit down with an aggressive driver to discuss our respective positions rationally, there is a good chance that it will end in a stalemate. Carrying out the discussion while both are still on the road is unlikely to end to the satisfaction of both parties. As well, the driver has already given us an important glimpse into his or her psyche with the “get off the road!” comment. We are well advised to pay heed to this bit of information.

An attempt to ‘teach them a lesson’ seldom accomplishes that, and just sends them on their way with a greater vendetta against any other cyclists they’ll encounter on their trip. Think about those other cyclists as well.

What is my goal?

When we choose to respond to someone who has affronted us, it’s important to think through just what it is we are hoping to accomplish. Do we want to pass along important information? Do we want to vent our frustrations? (hint: this is what the motorist just did, and how well did that go over with us?). Do we want to retaliate and cause the same amount of hurt/fear/irritation we went through? Do we want to be able to continue on our way safely, and get back to the riding we were doing before the altercation took place?

Each desired action will require a very different approach, and each has a widely varying likelihood of success. Think about it.

There are times when a motorist expresses an intent to harass or injure a cyclist. When this happens, just get off the road. Do you really want to call their bluff? Cyclists have been hit, and when that happens, it is often after the motorist has given some kind of clue as to their intent. Take that clue at face value and take yourself out of the range of conflict.

My desire to teach someone a lesson—a desire that I constantly have to keep in check—is a response to people exploiting others’ vulnerability, and comes from knowing that someone can run a person off the road then still be allowed to be behind the wheel. That’s when I have to think of personal safety versus long-term cycling advocacy and education goals.

Now, I’m sure that each of us has encountered a situation — perhaps at a social gathering, or at a store counter, helmet in hand — where we’ve been called to task for the behavior of other cyclists. You have absolutely no obligation to defend the dangerous actions of anyone else, whether they be another cyclist, a motorist, a pedestrian, or any other road user. Your only responsibility is for your own actions, just as no one motorist should be expected to answer for any other motorists’ actions.

There are ways to safely and respectfully enlighten motorists (and for that matter, other cyclists, as well as pedestrians), but these can rarely be done while you’re on the road.

Now let’s revisit the comment that gave rise to this article in the first place, and consider a possible outcome:

Motorist: “Get off the road!”

Cyclist: “Actually, I have every right to be here. The (insert applicable state or provincial law here) outlines those rights. I pay for the roads, too, through municipal, provincial and federal taxes. I’m acting in a safe and responsible manner, respecting other road users and expecting the same in return. My choice of transportation helps reduce traffic congestion and results in a healthier population, and benefits you in many ways you might not realize, including reduced municipal spending on infrastructure. I am entitled to be sharing the road with you.”

Motorist: “That makes sense. Thanks for sharing that information with me. Have a great ride!”

Is that likely to happen? Best to just smile and nod, and go on your way. 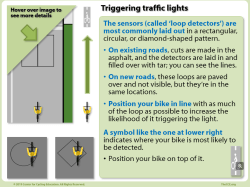