Home » About us » Allan Dunlop 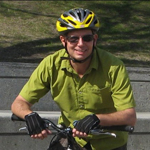 Allan Dunlop is the Director of the Center for Cycling Education.

Allan is the first person in North America to be certified to train cycling instructors in both the United States and Canada, as Master Instructor with the League of American Bicyclists’ Smart Cycling program, and a National Examiner with Cycling Canada’s CAN-BIKE program.

In the spring of 2010, he developed the Defensive Cycling curriculum for the traffic citation dismissal program in Austin, Texas. This was an initiative of the Austin Cycling Association (now BikeAustin) and the Austin Municipal Court.

In the fall of 2012, the first interactive, online traffic skills course for cyclists was released. In April 2013, the online course was accepted by the Austin Municipal Court for fulfilling the requirements of the Defensive Cycling program. A North America-wide version of the online course was released in December 2014, and separate courses created for the USA and Canada in February 2015.

His many roles in cycling advocacy and public education include coordinating numerous city-wide cycling events. Allan was Co-Coordinator of Bike to Work Week 2002 (Victoria, BC, Canada), and Coordinator of Bike Week (2000), Bike Month (2001) and the Commuter Challenge (2000 and 2001) in Nanaimo, BC, Canada.

Positions held include Director with the Greater Victoria Cycling Coalition, Vice-Chair of the City of Victoria’s Cycling Advisory Committee, and President of the British Columbia Cycling Coalition (BCCC). He was a member of the group that worked to bring the Pro Bike/Pro Walk Conference (as it was then known) to Victoria, BC in 2004.

A family history with bikes

He has been a cyclist since 1969, when his Dad built him his first bike. His grandfather and two great uncles each owned bike shops in Wales, and his father was a bike mechanic for a time in Wales and the United States just after World War II. When you ride up to a traffic light and nothing happens, and you wait and wait...It doesn't happen to people driving a car, yet there are ways of getting the light to change. (And if it doesn't, here's what you can do.)thecce.org/cycling-skills/traffic/triggering-a-traffic-light-on-your-bike/ ... See MoreSee Less

Now available: an extensive update to our Traffic Smarts for Cyclists courses! Separate versions for Canada and the USA.Act now before the upcoming price increase.thecce.org/online-courses/ ... See MoreSee Less

A worthwhile article. Thanks very much to Ron Richings for sharing."Cycling alone in the dark is still a privilege.""Planners need to be thinking about the people who are the least likely cyclists: older people, the disabled, women, and children,” Clement said. “And if you think of disabled people first, in particular, you’ll often cover everybody’s needs.”"usa.streetsblog.org/2021/02/12/how-to-support-women-on-bikes-in-winter/ ... See MoreSee Less

How to Support Women on Bikes in Winter

“In order for the bike boom to continue, we have to include everyone, and that’s not just about snow clearance,” said one panelist at the Winter Cycling Conference.
View on Facebook
· Share

Framing things in the right way. This is fun to watch.(Thanks to Christopher Stanton for making me aware of this.) ... See MoreSee Less

Every night I would get an alert from my driveway security camera, and at first I was a bit annoyed, but then I found myself looking forward to the evening a...